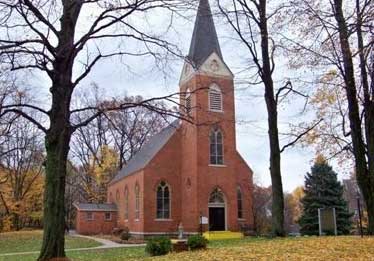 Chief Leopold Pokagon and his tribe of Potawatomi Indians built a log church here in 1838 and deeded the forty acres of land on which it stood to the Catholic Bishop of Detroit. Pokagon, who came to Silver Creek Township from his village outside of nearby Niles, was buried on this site in 1841. During the early 1840s, the Holy Cross Fathers of Notre Dame in Indiana ministered to the Indians. In 1844 Father Theophile Marlvault became the church’s permanent priest; he was followed by Father Louis Baroux who served most of the years from 1847 to 1870 and was buried in 1897. In the mid-nineteenth century, many Irish immigrants settled in the vicinity and attended this parish. The white frame church built in 1861 burned in 1886 and was immediately replaced by the present structure. 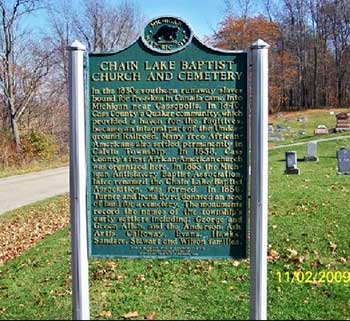 Narrative description: Chain Lake Baptist Church is located on the south side of Chain Lake Road between Calvin Center Road and Union Road in Calvin Center Township. It is thought to be the oldest church in Cass County. The one-acre cemetery contains seventeen hundred graves, of which four hundred are from the nineteenth century. The gently rolling landscaped grounds contain several family monuments, dozens of fieldstone headstones, and more recent marble markers. The family monuments recall the names of William, George, and Green Allen, Kitchen Artis, Dr. Charles Newsom, the township’s first regular physician, and other early pioneer settlers in Calvin Township.

Statement of significance: The Chain Lake Baptist Church Cemetery is the final resting place of pioneers of one of Michigan’s and Cass County’s oldest African-American communities, Calvin Township. The first permanent African-American settlers came to Calvin in 1845 when John Stewart, Lamoon Howell, and Ezechial Cole migrated here from Logan County, Ohio. The Chain Lake Baptist Church was organized by Elder David Lett on January 14, 1848, with eight members. A log church costing $1200 was erected two years later. On March 8, 1856, church trustee Turner Byrd and his wife donated an acre of land for use as a cemetery for church members. It has remained in continued use for one hundred and thirty years.

Marker text: CHAIN LAKE BAPTIST CHURCH AND CEMETERY In the 1830s southern runaway slaves bound for freedom in Canada came into Michigan near Cassopolis. In 1840, Cass County’s Quaker community, which provided a haven for the fugitives, became an integral part of the Underground Railroad. Many free African-Americans also settled permanently in Calvin Township. In 1838, Cass County’s first African-American church was organized here. In 1853 the Michigan Antislavery Baptist Association, later renamed the Chain Lake Baptist Association, was formed. In 1856, Turner and Irena Byrd donated an acre of land for a cemetery. The monuments record the names of the township’s early settlers including George and Green Allen, and the Anderson, Ash, Artis, Calloway, Evans, Hawks, Sanders, Stewart and Wilson families. 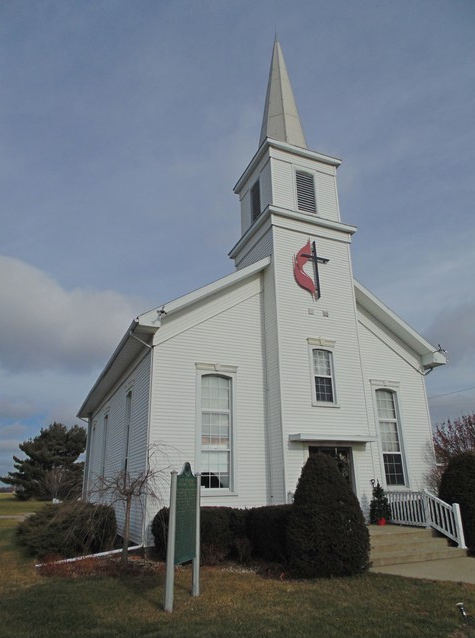 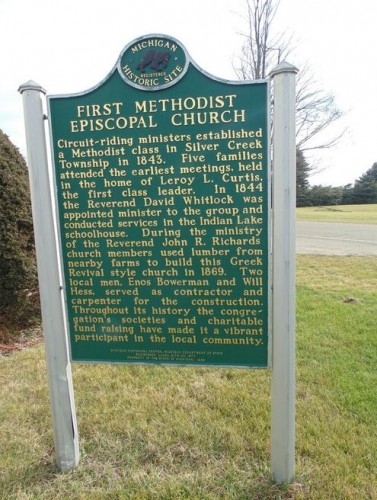 Marker Inscription: FIRST METHODIST EPISCOPAL CHURCH circuit-riding ministers established a Methodist class in Silver Creek Township in 1843. Five families attended the earliest meetings, held in the home of Leroy L. Curtis, the first-class leader. In 1844 the Reverend David Whitlock was appointed minister to the group and conducted services in the Indian Lake schoolhouse. During the ministry of the Reverend John R. Richards, church members used lumber from nearby farms to build this Greek Revival style church in 1869. Two local men, Enos Bowerman and Will Hess served as contractors and carpenters for the construction. Throughout its history, the congregation’s societies and charitable fundraising have made it a vibrant participant in the local community. 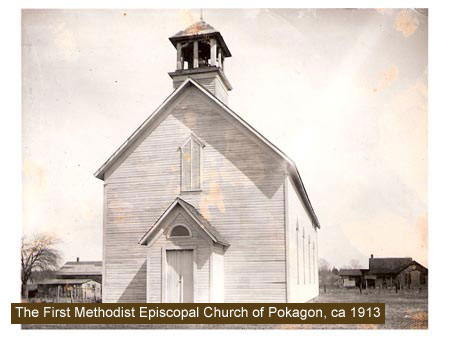 Narrative description: The Original Old Rugged Cross Church is a rectangular, two-story vernacular late nineteenth-century building with a gabled roof and small gabled vestibule in the center of the tall, narrow facade. Created by an 1876 enlargement and remodeling of a circa 1862 hop barn, the building has a length of ninety feet and width of twenty-eight feet. Horizontal bevel-edge white wood siding clads the building’s walls and door and window openings in the front and sides display triangular heads, except for a square-head entry way and lunette above it in the front of the projecting gabled vestibule. The interior contains a flat-ceilinged sanctuary or auditorium occupying the larger part of the space, and, at the back, a first-floor kitchen area with a Sunday school room above it. The church is undergoing restoration after more than eighty years of disuse and neglect.

Historical significance: A one time hop barn enlarged and remodeled in 1876 to house the First Methodist Episcopal Church of Pokagon, the Original Old Rugged Cross Church was the place where visiting Methodist evangelist the Rev. George Bennard’s hymn, “The Old Rugged Cross,” was sung publicly in its entirety for the first time. Rev. Bennard wrote more than 300 hymns in his lifetime. Few but the one that made its unpretentious 1913 debut in Pokagon, Michigan, achieved notoriety. Although it is not possible to know exactly why the hymn captured so many people, it’s deceptively simple, clear lyrics and singable harmony apparently carried the right message at the right time to a tumultuous world. The hymn quickly became revered across the United States and in other countries and remains a classic hymn nearly ninety years after its debut. 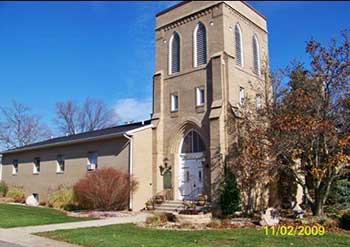 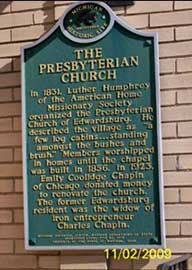 Plaque text: In 1831, Luther Humphrey of the American Home Missionary Society organized the Presbyterian Church of Edwardsburg. He described the village as “a few log cabins … standing amongst the bushes and brush.” Members worshiped in homes until the chapel was built in 1856. In 1923, Emily Coolidge Chapin of Chicago donated money to renovate the church. The former Edwardsburg resident was the widow of iron entrepreneur Charles Chapin. 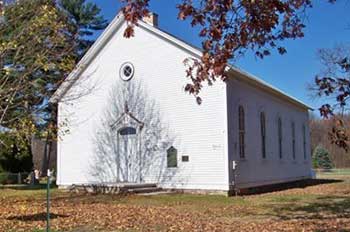 Narrative Description: The Smith’s Chapel property includes both a one-story, gable-roofed, wood frame chapel covered with clapboard siding and a four-and-one-half-acre cemetery. The chapel features a gabled entrance with a transom surmounted by an oculus in front. Round-arch windows with wooden hood molds light the sanctuary. The chapel stands on a rubble fieldstone foundation. A gable-roof, clapboard-sided privy is located at the rear of the church. The cemetery contains stone (and one zinc) monuments. The grounds are partially contained within a modern chain-link fence.

Statement of significance: Smith’s Chapel is the oldest known church building in Cass County, and probably also the oldest in southwest Michigan. Built in 1840 by settlers on Beardsley’s Prairie in what became Milton Township, the chapel is the most visible product of an early colonization of the area by settlers from Delaware. The work of Methodist circuit preachers led to the organization of a church on July 1, 1839. Cannon and Charlotte Smith, formerly of Delaware, sold the land and donated liberally to build the chapel which was named in their honor. In 1879, contractor W. S. Beswick was hired to remodel and modernize the church. The adjoining cemetery grounds were purchased in 1872 and many remains and monuments of early settlers, including those of the Smiths, moved from family plots to this ground. The chapel is no longer used for regular worship but is occasionally the site of weddings and funerals. 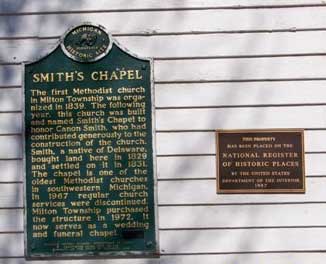 Marker text: SMITH’S CHAPEL The first Methodist church in Milton Township was organized in 1839. The following year, this church was built and named Smith’s Chapel to honor Cannon Smith, who had contributed generously to the construction of the church. Smith, a native of Delaware, bought land here in 1829 and settled on it in 1831. The chapel is one of the oldest Methodist churches in southwestern Michigan. In 1967 regular church services were discontinued. Milton Township purchased the structure in 1972. It now serves as a wedding and funeral chapel. 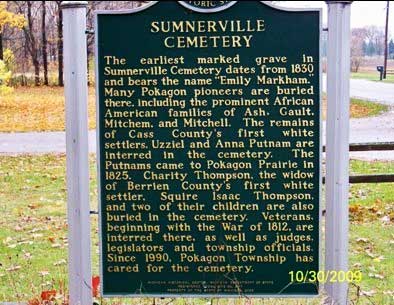 SUMNERVILLE CEMETERY The earliest marked grave in Sumnerville Cemetery dates from 1830 and bears the name “Emily Markham.” Many Pokagon pioneers are buried there, including prominent African American families of Ash, Gault, Mitchem, and Mitchell. The remains of Cass County’s first white settlers, Uzziel and Anna Putnam are interred in the cemetery. The Putnams came to Pokagon Prairie in 1825. Charity Thompson, the widow of Berrien County’s first white settler, Squire Isaac Thompson, and two of their children are also buried in the cemetery. Veterans, beginning with the War of 1812, are interred there as well as judges, legislators and township officials. Since 1990, Pokagon Township has cared for the cemetery.