This webpage is not meant to be a completed index of the historical public structures present in Cass County, Michigan. Please contact us if you want to recommend we add additional structures of historical importance to Cass County. This website will always be a work in progress to serve our communities with the best and most up-to-date information possible. Your input is important to us! 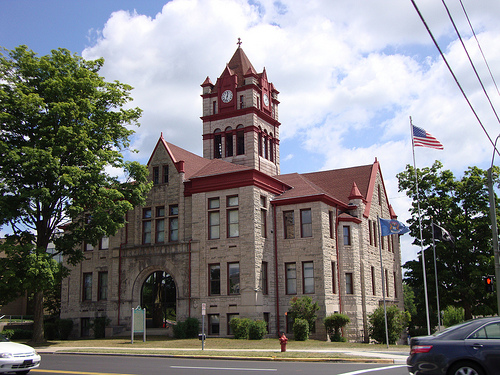 Narrative description: The Cass County Courthouse is a three-and-one-half story, asymmetrically massed building with parapeted gables and an irregularly coursed ashlar limestone exterior. A large square clock tower with dark stone band courses, rounded arch windows, and square spires dominates the structure. The current courthouse, constructed in 1899, is the third built since 1835 to serve the people of Cass County. 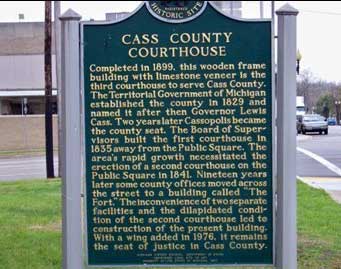 Marker text: CASS COUNTY COURTHOUSE Completed in 1899, this wooden frame building with limestone veneer is the third courthouse to serve Cass County. The Territorial Government of Michigan established the county in 1829 and named it after then Governor Lewis Cass. Two years later Cassopolis became the county seat. The Board of Supervisors built this first courthouse in 1835 away from the Public Square. The area’s rapid growth necessitated the erection of a second courthouse on the Public Square in 1841. Nineteen years later some county offices moved across the street to a building called “The Fort.” The inconvenience of two separate facilities and the dilapidated condition of the second courthouse led to the construction of the present building. With a wing added in 1976, it remains the seat of justice in Cass County. 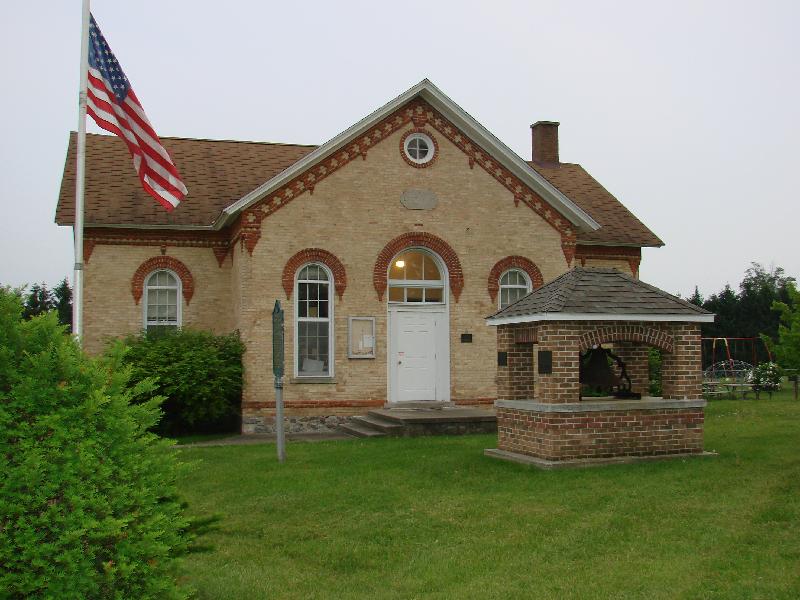 Narrative description: The Mason District Number 5 Schoolhouse is a one-story, T-plan, yellow brick structure resting on a fieldstone foundation. Raised dark red brick trim forms Italianate-inspired hood molds over the arched windows and door frame and trims the cornice, forming triangle-shaped downward projections which mimic the appearance of brackets. In the raking eaves, the red brick trim is inset with yellow brick crosses. A double row of red brick also forms a belt course marking the separation between the first floor and foundation on the exterior. A gable-roofed, single-story addition, constructed c. 1988, extends off of the rear of the building.

Statement of significance: In size and architectural distinction, the District Number 5 Schoolhouse is far in advance of the typical late nineteenth-century rural Michigan school building. Constructed in 1875, the structure served Mason Township as a school for up to 110 students until 1959. In 1964, the schoolhouse was reopened as the township hall. Since 1972, the former District Number 5 Schoolhouse has accommodated the Mason-Union Branch of the Cass County Library as well as the township hall. 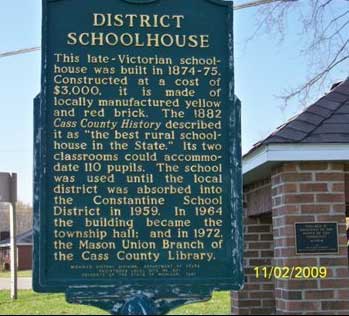 Marker name: District Schoolhouse
Marker text: DISTRICT SCHOOLHOUSE This late-Victorian schoolhouse was built in 1874-1875. Constructed at a cost of $3,000, it is made of locally manufactured yellow and red brick. The 1882 Cass County History described it as “the best rural schoolhouse in the State.” Its two classrooms could accommodate 110 pupils. The school was used until the local district was absorbed into the Constantine School District in 1959. In 1964 the building became the township hall; and in 1972, the Mason Union Branch of the Cass County Library. 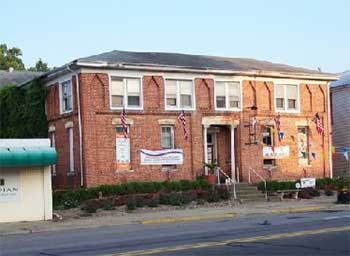 Narrative description: The Old Cass County Office Building/Masonic Temple consists of two sections: a rectangular, two-story, hipped roof, red brick, front section, which rests on a stone foundation, and a flat-roof, one-story, rubble stone, rear addition. The front section’s first-floor windows have cast-iron sills and lintels and the columns and lintel of the entrance porch are also of cast iron. Brickwork raised one brick’s width forms a pattern of brick panels in the front and side walls. The utilitarian rear section, which contains the hall, has a concrete foundation and simple, square-head windows.

Statement of significance: The Old Cass County Office Building/Masonic Temple was built in 1860 to accommodate the county offices and to have a fire-proof structure in which to store public records. Joseph Smith, a former member of the 1835-36 Territorial Legislature and successful Cassopolis merchant, constructed the brick and iron-trimmed building. The Old Cass County Office Building provided office space for the county clerk, judges of probate, register of deeds, and treasurer from 1860 to 1899 when the present Cass County Courthouse was completed. The Old Cass County Office Building is significant as one of only a very small number of such structures in Michigan surviving from the nineteenth century. It was used as a laundry until the local Masons purchased the building in 1923 for use as their temple. In 1925, a hall designed by Osgood and Osgood of Grand Rapids was added. 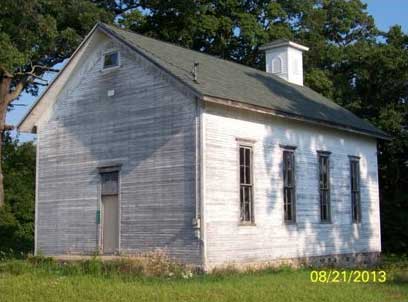 Narrative description: The Wayne Township School District No. 7 School, or White School, is a simple, massed-plan, gabled frame structure resting on a split fieldstone foundation. The shallow pitched roof is pierced by a brick chimney flue and supports a hipped-roof cupola. The street elevation is completely unembellished, lacks windows, and is pierced by a single five-panel entry door with a transom light. The four-bay-deep side elevations are symmetrical compositions consisting of four large four-over-four sash windows displaying milled surrounds with flat lintels. The two-bay-wide rear elevation, originally composed of two windows identical to those of the side elevations, reveals an early alteration of one of the windows into a door. The interior of the building survives virtually intact, including blackboards and some furnishings.

Statement of significance: The Wayne Township School District No. 7 School is a virtually unaltered example of rural one-room school architecture. It represents the importance of education in southern Michigan during the late nineteenth century and early twentieth century. It is known popularly as White School and is the third township school commonly known by the name of the man who originally donated ground for schools, Philo White. The present building was erected in 1885 by Christian Haeffner, a Cass County architect and builder who designed and built the George Newton House in Volinia Township, which is listed on the National Register of Historic Places. White School served the community for seventy-five years, closing in 1959. It has been maintained by local residents and presently is used by the 4-H Club and community meetings. 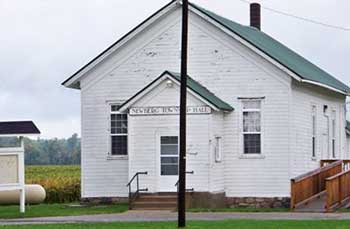 Marker text: POE’S CORNERS In 1835, George Poe (1779-1851) emigrated from Crawford County, Ohio, and settled on land deeded to him by the U.S. government. Within two years he acquired 520 acres of land in Newberg Township. Many members of the Poe family settled in this vicinity, and it became known as the Poe Neighborhood and Poe’s Corners. In 1838 the first recorded burial, that of Rachel Everhart, occurred in Poe’s Cemetery, located on one corner of George Poe’s farm. The First Regular Baptist Church of Newberg, also known as Poe’s Church, was organized in 1841; a church was erected in 1858. School District No. 2, known as Poe’s School, was created in 1856. In 1957 the school district merged with the Marcellus School District; the school building became the Newberg Township Hall in 1958. 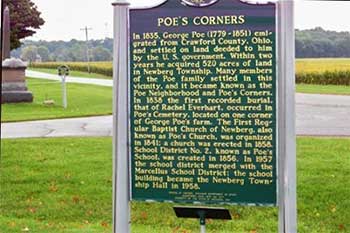 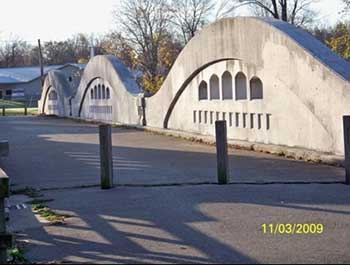 Narrative description: The US-12 St. Joseph River Bridge crosses the St. Joseph River in Mottville Township at the west edge of the Village of Mottville. It is situated at a historic river crossing, the fourth bridge to span the St. Joseph River at Mottville. The bridge is a two hundred and seventy foot long, reinforced concrete, camelback-arch bridge composed of three ninety foot long and twenty-two foot wide spans resting on concrete piers and abutments. The bridge is constructed using massive concrete reinforced steel girders, providing the structure with its distinctive arches. The interior of each arch is pierced with five openings occurring above a series of paired, recessed panels, which provide a decorative effect complementing the bridge’s sweeping concrete arches.

Statement of Significance: The US-12 St. Joseph River Bridge is the largest surviving reinforced concrete camelback bridge in Michigan. Camelback bridges such as this one were built from a standardized plan provided by the Michigan State Highway Department under the supervision of its bridge engineer, C.A. Melick. Built in 1922, the present bridge is the fourth to cross the St. Joseph River at Mottville. 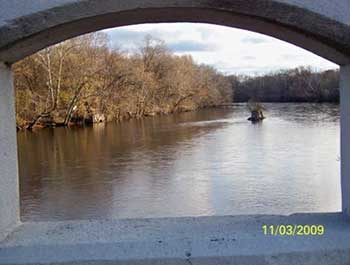 Marker text: MOTTVILLE BRIDGE The Great Sauk Trail, which connected Detroit, Chicago and Green Bay, Wisconsin, crossed the St. Joseph River at a shallow spot in this vicinity. Responding to the westward migration of pioneers, the federal government surveyed the trail and converted it into the Chicago Road (presently U.S. 12) in 1825. The first Chicago Road bridge to cross the river near Mottville was a substantial timber structure constructed in 1833-1834 by contractor Hart L. Stewart. A pile-supported bridge replaced it in 1845. In 1867, Mahlon Thompson and Joseph Miller built a covered Burr arch truss. The ruins of its stone-block abutments are visible upstream from here. This three-span camelback bridge was built in 1922. In 1990, U.S. 12 was rerouted over a new bridge. The camelback bridge is now used for foot traffic. SIDE TWO Constructed in 1922, this three-span, 270-foot-long bridge is the longest Michigan example of a reinforced concrete camelback bridge. These bridges are found primarily in Michigan and Ontario, Canada, and the Mottville Bridge is an excellent example of this design. It was built by contractors Smith and Nichols of Hastings under the direction of State Bridge Engineer C. A. Melick. The Michigan State Highway Department pioneered the use of standardized designs for concrete bridges. By the early 1920s, the department had established standardized plans for camelback spans of 50, 60, 70, 75 and 90 feet. This bridge contains three identical 90-foot spans. It was preserved as an engineering landmark by the Michigan Department of Transportation when the present U.S. 12 bridge was erected.