Located in Dowagiac, Michigan, this historical station is currently served by Amtrak, the national railroad passenger system, and is one way of getting to Cass County. The station was built by the Michigan Central Railroad in 1902 and added to the National Register of Historic Places in 1993. Historical Significance: The Michigan Central Railroad built a set of tracks providing passenger service through Dowagiac in 1848. A new depot was constructed in the 1870s. The current station, replacing the 1970s station, is the third constructed by the Michigan Railroad in Dowagiac. The architect for the station is not documented but is almost certainly the firm of Spier and Rohns. The railway hired contractor M. J. Rogers of Detroit to supervise construction. The building was completed in 1903 and has remained in use as a passenger station since that time. A restoration project took place in 1995. Narrative description: The train depot is a single-story brick Tudor Revival structure trimmed with limestone. The depot consists of two hip roof buildings, one for passengers and one for baggage, connected with a gable roof canopy supported by metal columns. The passenger station has a square two-story tower projecting from the street side and a projecting octagonal ticket office on the track side. The station is accessed through a port cochere and glassed-in entry porch. Hip roof dormers are placed on the roof, and rows of square head windows line the sides of both the passenger station and baggage depot. Today there are four high-speed Amtrak passenger trains between Chicago, Illinois and Port Huron, Michigan that make daily stops at the historic Dowagiac Train Station. The “Blue Water” train travels from Chicago to Dowagiac in 1 hour and 43 minutes. Amtrak does not provide ticketing or baggage services at the Dowagiac station. These services, schedules, and fares can be found here www.amtrak.com or by calling (800) 872-7245. 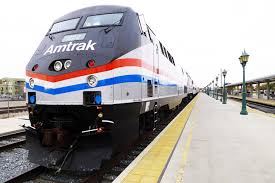 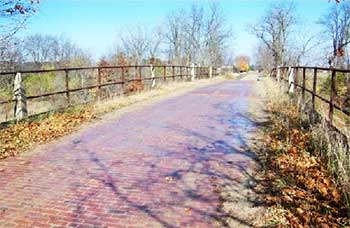 Narrative description: Main span number: 5 main span length: 35.0 structure length: 169.0 roadway width: 22.7 structure width: 20.4 The Thomson Road Bridge, which is positioned on a north/south axis, is located in rural farmland. The railroad bed which is crossed by the bridge has been abandoned for many years, and the area beneath the structure is overgrown. The original railings consist of concrete posts with pyramidal tops (mostly deteriorated), each joined by five metal-pipe panels between each post. The deck arches slightly, and the structure is skewed. “1919” is impressed in concrete on the outside of the curbs in the middle span. Statement of significance: This structure is among the oldest examples of a concrete T-beam bridge in the survey, and only one of this type has more spans. The design is quite different from the standard plans used at the time by Michigan State Highway Department. The plans for this structure were probably developed by the railroad company, which had a switching yard and many associated tracks in the area. The tracks under the bridge were originally operated by the Michigan Central Railroad; later, other companies assumed control over the trackage. The main line of the Michigan Central, which was built in Cass County in 1848, is about one-half mile west of the bridge site. After the Civil War, a new railroad called “Airline” linked Jackson with the Michigan Central line at Niles. Within two years, the Michigan Central controlled the Airline routes. A 1935 county history noted that a cut-off was built to connect the Airline route and the main line of the Michigan Central in Howard Township “some fifteen years ago.” That date seems to correspond to the 1919 date of the bridge. The wide right-of-way near the bridge was used as a railroad switchyard known as the “Hump.” The Thomson Road Bridge is eligible for the National Register under Criterion C, as an excellent example of a concrete T-beam bridge with very good historical integrity. Property type: Bridge Current Use: Transportation Period of significance: 1919 Registry type(s): National Register listed 12/22/1999 Site ID: P22233 Location: 1700 Thompson Road, Howard Township, Niles, MI, (Road built over abandoned RR right-of-way) – Directions

We are looking for community input on railroad building sites in Cass County, Michigan. Please also include historical significance and any other information you might have. Photographs, old and current are also very much appreciated. Please email contact@discovercasscounty.com with information and questions.