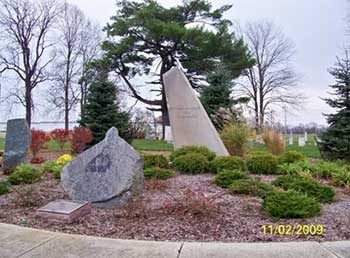 Narrative description: The Kincheloe Military Memorial Park is only one of many military memorials in Cass County, Michigan. Iven Carl “Kinch” Kincheloe, Jr. was an American test pilot, recipient of the Silver Star and Distinguished Flying Cross, and an ace in the Korean War. He lived from July 2, 1928, to July 26, 1958. Kincheloe was born in Detroit, Michigan but grew up in Cassopolis, Michigan. He was interested in aircraft from a very young age. He attended Purdue University, where he majored in aeronautical engineering, joined the ROTC and was a member of Sigma Phi Epsilon-Indiana Alpha fraternity. In the summer of 1948, the ROTC cadet was able to meet Chuck Yeager and sit in the cockpit of the Bell X-1. 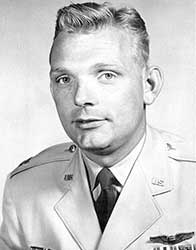 After graduating in 1949, Kincheloe received his commission in the U.S. Air Force. He spent a year as a test pilot flying the F-86E at Edwards Air Force Base before being promoted to First Lieutenant and transferred to Korea in September 1951. During the war, he flew F-80s on 30 missions and F-86s on 101 missions, downing five MiG-15s (becoming an ace and earning the Silver Star) before returning to the U.S. in May 1952. At this time, he had reached the rank of captain.

After the war, he again became a test pilot, participating in the testing of the Century Series of fighter aircraft (F-100 Super Sabre, F-101 Voodoo, F-102 Delta Dagger, F-104 Starfighter, F-105 Thunderchief, and F-106 Delta Dart). In the mid-1950s, Kincheloe joined the Bell X-2 program and on September 7, 1956, flew at more than 2,000 mph (3,200 km/h) and to a height of 126,200 feet (38,500 m) the first flight ever above 100,000 feet. For this, he was nicknamed “America’s No. 1 Spaceman”. The X-2 program was halted just three weeks later after a fatal crash resulted in the death of Mel Apt in a flight in which Apt became the first person to exceed Mach 3. Three years later, Kincheloe was selected as one of the first three pilots in the next rocket-powered aircraft program, the X-15, and would have been part of the Man In Space Soonest project. He was killed in the crash of an F-104A at Edwards AFB, and was buried with full military honors at Arlington National Cemetery. The Kincheloe Memorial Park is maintained by the Cass County Department of Parks & Recreation. 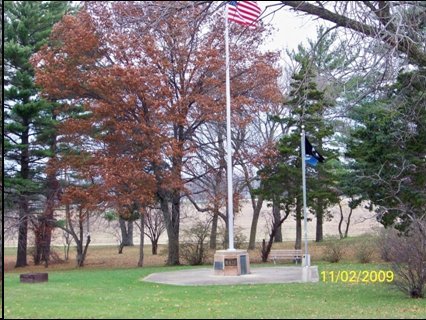 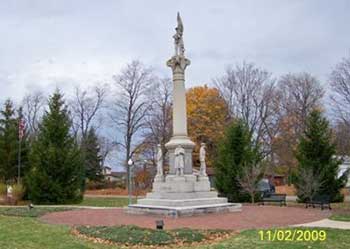 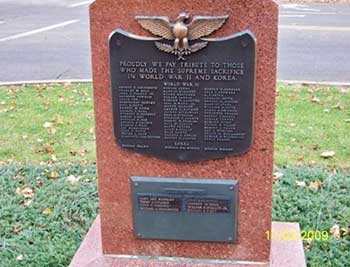 Narrative description: Proudly we pay tribute to those who made the supreme sacrifice in World War II, Korea, and Vietnam

The names of the fallen are listed. 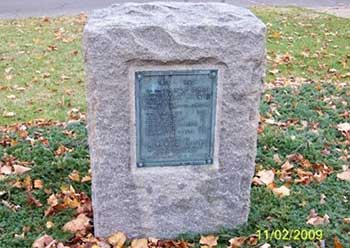 In memory of The 19th Michigan infantry By the Woman’s Relief Corps Of Cass County 1922. Auxiliary to the Grand Army of the Republic 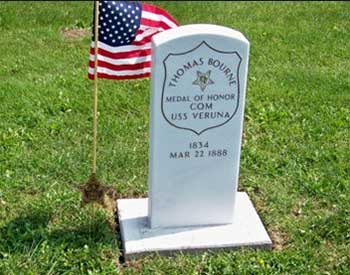 Narrative description: Bourne was born in England in 1834 and “ran away to sea” when he was 14, finding work as a “chore boy” on ships plying the Atlantic Ocean. In 1861 in New York, he enlisted in the U.S. Navy, and he was a gun captain on board the USS Varuna in April 1862, when it took part in attacks on Forts Jackson and St. Philip near New Orleans. An excerpt of Bourne’s citation reads, “During this action at extremely close range while his ship was under furious fire and was twice rammed by the rebel ship Morgan. Bourne remained steadfast at his gun and was instrumental in inflicting damage on the enemy until the Varuna, badly damaged and forced to beach, was finally sunk.” Bourne survived the encounter unscathed but wasn’t as fortunate two years later, when he was injured while “shifting” a gun. He was a chief quartermaster when he was discharged in November 1864. Bourne migrated to Jones where he bought a farm and married Hannah Fowler. Hannah died about six months after the couple moved to Schoolcraft, and Bourne returned to Jones, where he remarried. In 1885, he was awarded a Navy pension of $8 a month, retroactive to the year before. He died in March 1888, apparently of heart disease. 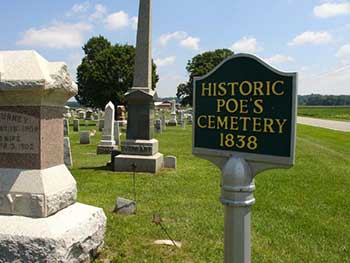 Rank and organization: Seaman and Gun Captain, U.S. Navy. Entered service at New York, N.Y. Birth: England. G.O. No.: 11, 3 April 1863. Citation: Served as captain of a gun on board the U.S.S. Varuna during an attack on Forts Jackson and St. Philip and while under fire and ramming by the rebel ship Morgan, 24 April 1862. During this action at extremely close range, while his ship was under furious fire and was twice rammed by the rebel ship Morgan, Bourne remained steadfast at his gun and was instrumental in inflicting damage on the enemy until the Varuna, badly damaged and forced to beach, was finally sunk. 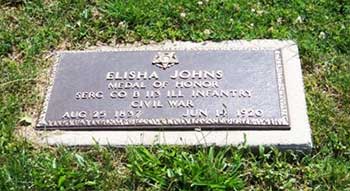 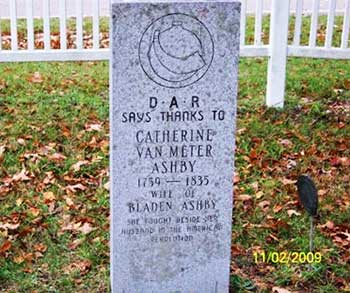 Narrative description: Catherine Van Meter Ashby was born June 13, 1759 and died in 1835. She married Bladen Ashby April 1, 1787. Bladen was born in 1759 and died in 1828. Records show they had at least 11 children. Her grave and marker are located in the Oak Dale Cemetery in Vandalia, Michigan.

George Washington frowned on women fighting in the Revolutionary war thus no official records have yet been located in the nation’s archives for Catherine Van Meter Ashby (Sometimes spelled Nashby). The only information is from family letters. Mrs. Ashby is reported to have fought by the side of her husband Bladen Ashby. He died in 1828 and is buried near Richmond, Indiana.

Mrs. Ashby moved to Cass County with her daughter, Eleanor Ashby Pemberton, and her Son-in-law Joseph Pemberton, in November 1835. They are both buried adjacent to Mrs. Ashby in Oak Dale Cemetery.

Eleanor Ashby Pemberton and her husband Joseph Pemberton were another couple who fought side by side in the War of 1812. This was at the siege of Fort Meigs which took place during the War of 1812, in northwestern Ohio. A small British army with support from Indians attempted to capture the recently constructed fort to forestall an American offensive against Detroit, which the British had captured the previous year. An American sortie and relief attempt failed with heavy casualties, but the British failed to capture the fort and were forced to raise the siege.