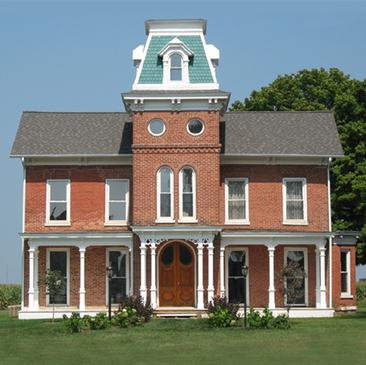 Vandalia was a major hub on the Underground Railroad. It’s claimed that over 1500 fugitive slaves (now called freedom seekers) were helped to freedom in Canada by Quakers and free blacks living in Penn, Calvin and Porter townships.

The Underground Railroad Society of Cass County (URSCC) is a 501c3 non-profit organization founded in 2009 with the mission of telling the story of the Underground Railroad (UGRR) in Cass County, and the goal of restoring the historic James E. Bonine House and Carriage House in Vandalia to act as focal points for researching and telling the story.

The best way to get an overview of the UGRR in Cass County is to visit the website of URSCC at https://www.urscc.org/.  Another hands-on way to learn about the Underground Railroad Society of Cass County is to take the 14-site self-guided Driving Tour of Underground Railroad sites around Vandalia. You can obtain a tour map at the historic marker in Milo Barnes Park in Vandalia, the first stop. The tour takes about an hour, the map also includes brief histories of the UGRR in Cass County and the 1847 Kentucky Raid. https://www.urscc.org/driving-tour

Yearly events sponsored by URSCC are:

Bonine Carriage House is located at the corner of Calvin Center Rd. and M-60, Vandalia, MI.

URSCC is currently engaged in “It’s Time” Capital Campaign to complete the restoration of the Bonine House and Carriage House by 2017. Information about the campaign can be found at www.urscc.org Tax deductible donations are welcome at URSCC PO Box 124, Vandalia, MI 49095. 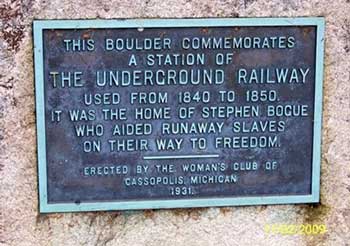 Narrative description: Stephen was born in North Carolina on October 17, 1790, youngest of 15 children. In 1811 the Quaker family immigrated to Preble County, Ohio to escape the institution of slavery. In January 1822 he married Elva Elliott of Wayne County IN. Their daughter Sarah married James E. Bonine in Cass County in 1844. Elva Bogue died in 1828. Hannah East was born in Virginia in 1798, migrated to Tennessee in 1807, then on to Wayne County, IN in 1816, where she married James Bonine in 1824 becoming mother to James Bogue Bonine. She married Stephen Bogue in 1831 and moved with him to Penn Township. Quaker Stephen Bogue was one of the founders of the Birch Lake Monthly Meeting, then the Young’s Prairie Anti-Slavery Meeting. The Bogue house became a well-known station on the Underground Railroad, harboring many fugitives on their way to Canada. A stone marker describes it: “This boulder commemorates a station of the Underground Railway used from 1840 to 1850. It was the home of Stephen Bogue who aided runaway slaves on their way to freedom.” Erected by the Woman’s Club of Cassopolis, Michigan 1931. (Note that Dr. Nathan and Nancy Thomas of Schoolcraft say they received freedom seekers from Cassopolis until 1860.) In his account of the night of the Kentucky Raid, Perry Sanford says he was staying in one of the Bogue cabins, got out through the roof, alarmed Stephen Bogue and was hidden by Mrs. Bogue in the upstairs of their house. Stephen Bogue donated land and platted the Village of Vandalia. He was a much-respected member of the community. 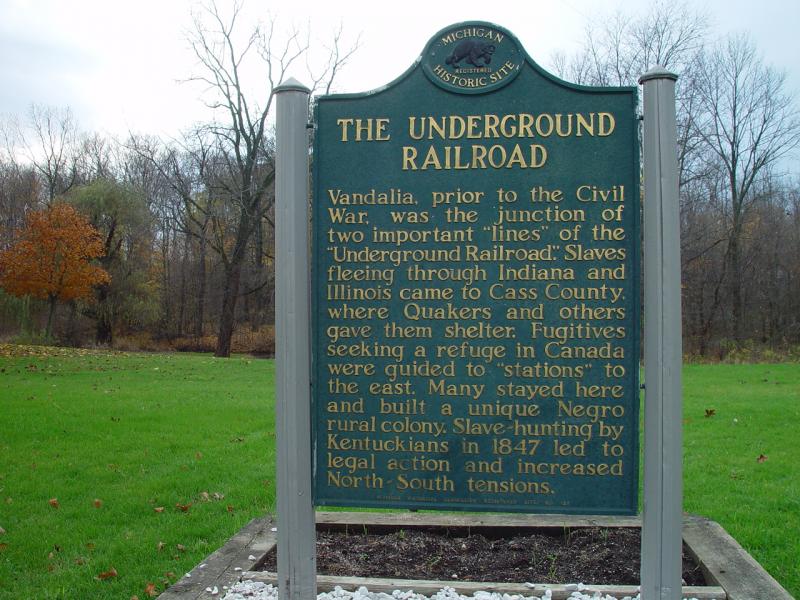 Marker text: THE UNDERGROUND RAILROAD Vandalia, prior to the Civil War, was the junction of two important “lines” of the “Underground Railroad.” Slaves fleeing through Indiana and Illinois came to Cass County, where Quakers and others gave them shelter. Fugitives seeking a refuge in Canada were guided to “stations” to the east. Many stayed here and built a unique Negro rural colony. Slave-hunting by Kentuckians in 1847 led to legal action and increased North-South tensions. Visit the website of the Underground Railroad Society of Cass County, Michigan for more information.

URSCC’s 14-site self-guided driving tour begins at this marker. Tour maps and brochures may be downloaded from the website www.urscc.org/drivingtour